Differences between Dry Yeast and Compressed Yeast in bakery products 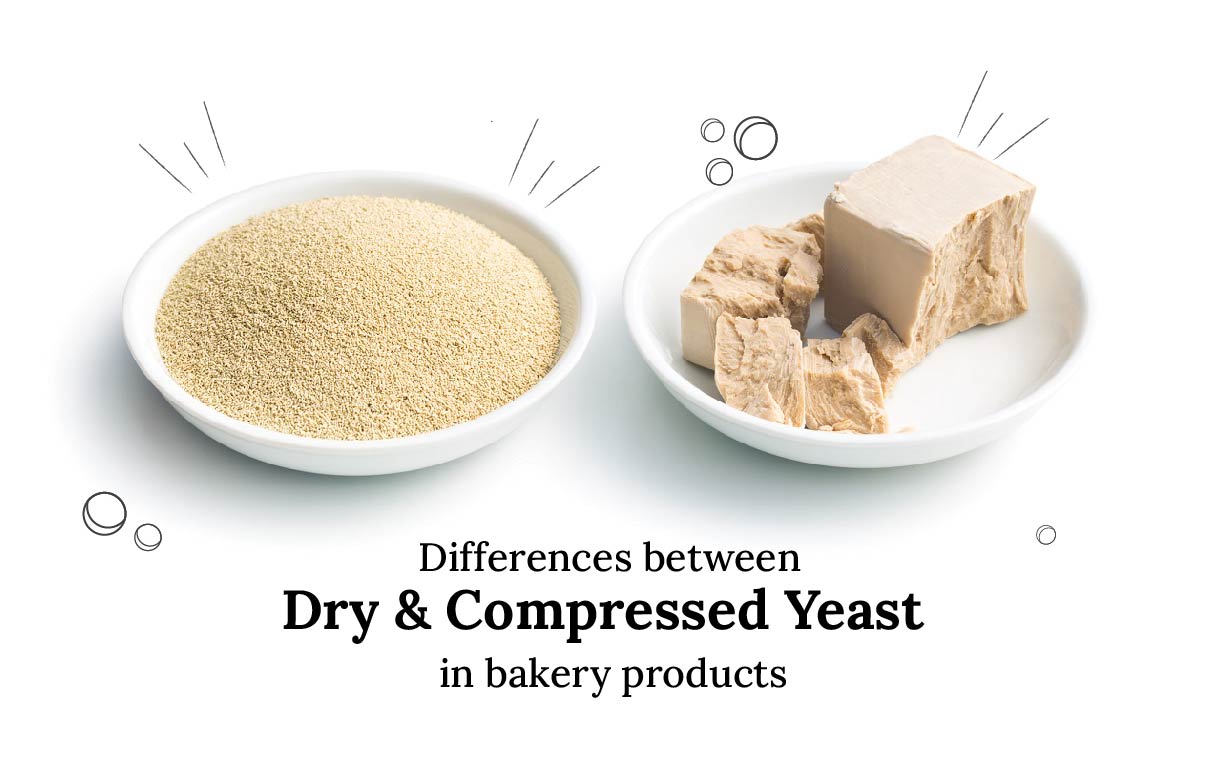 Yeasts are microorganisms which are single-celled and classified as part of the Kingdom Fungi. The scientific name for the yeast used for bakery products is called Saccharomyces Cerevisiae which literarily means sugar-eating fungus. It is responsible for the rising of the dough because of its strength and ability to ferment. The fermentable sugars in the dough are converted into Carbon dioxide and ethanol.

For bakery products, there are majorly two types of yeast with the main difference being their moisture contents. The dry yeast (dehydrated granules) and fresh yeast (compressed cakes) are the two major types though we have instant dry yeast which is generally classified under types of dry yeast. Fresh yeast is a soft and solid block made of yeast and water but with most of its water removed while dry yeast is partially dehydrated and consists of granules of yeasts.

How different is the dry yeast from the fresh yeast? Which makes products taste better and easier to use? Answers to these questions are considered below.

Both fresh and dry yeast could be dissolved in some form of warm liquid to get them active. This is done until bubbles begin to rise to the surface of the yeast composition just before it is added to the other baking ingredients (also known as proofing). But as a result of the size of granules, dry yeast generally has low mean time to activeness than fresh yeast. Fresh yeast has smaller granules and a very high percentage of live cells when compared to its unit volumes. This allows it to react more quickly than dry yeast.

Fresh and dry yeast both have a slightly different impact on bakery products as regards the taste. Fresh yeast gives products a more robust flavour because it ferments for much longer than dry yeast. The slower and longer it takes for the dough to rise, the better the flavour that will result from it. Fresh yeast has a particular taste and aroma that usually disappears during this stage of fermentation. After fermentation, an entirely different; a milder and sweeter taste is the result. Dry yeast, on the other hand, doesn’t add much ‘’bready’’ taste as fresh yeast. It can often add sharper and more fermented flavour to baked products especially if used in excess.

In compositions, the quantity of dry yeast needed to match up with fresh yeast is usually considerably lesser. To use fresh yeast in a composition that requires dry yeast, you would have to double the amount. As an actual industry standard, the dry yeast can be used at 40% the mass of the fresh.

Dry yeast, because it is in granules or slightly powdery form easily dissolves and is quite more easy to use in compositions. For fresh yeast, it is approximately made of 70% moisture content it is usually necessary to crumble and dissolve it before mixing it else it will not be evenly distributed throughout the dough. While the processes to dissolve dry yeast is not as stressful as that of fresh yeast. In fact, instant yeast (a form of dry yeast) has been grounded into very fine granules which make it possible to directly add it into the flour and mix it with the other ingredients.

Storing dry yeast is very easy to do. This is because it has been made void of moisture; dry. It can hence be put in a sealed container, and a cool, dry place without any need to be refrigerated though doing that would extend its shelf life. It can then go on to be stored like this for even as long as two years without losing its potency. And it can still be used after the two years by increasing the dosage slightly. Bakery products made with dry yeast also have longer shelf lives as a result of this advantage.

The opposite is the case for fresh yeast. It is highly perishable and cannot last very long at room temperature. Even when placed in the refrigerator, it doesn’t last more than a few weeks at most. And products resulting from it do not last as long as those made from dry yeast.

In the baking industry, the most preferred type of yeast for large-scale bakery products is still fresh yeast. Even with some of its obvious disadvantages, it is still used ahead of dry yeast. This is mainly because of its ability to quickly become active, the better “rising-ability” which it gives to the dough and it’s added bready flavour which it adds to the bakery products.

The dry yeast is more likely to be found in supermarkets because of its higher shelf life. And this is the one reason for which many home bakers would prefer to use it ahead of fresh yeast. Its reliability, predictability and shorter fermentation period could be under reasons responsible for the wide home usage.

8. Cost of purchase and availability

Dry yeast is very much easier to find in groceries and supermarkets and is considerably cheaper to purchase than fresh yeast. Fresh yeast has recently become more difficult to find at supermarkets because of its low shelf life. Apart from the fact that it is easily perishable, the fact that fresh yeast is even more expensive to purchase has made many home bakers resort to using the dry yeast instead.

The Future of F&B I

All about post-covid pro