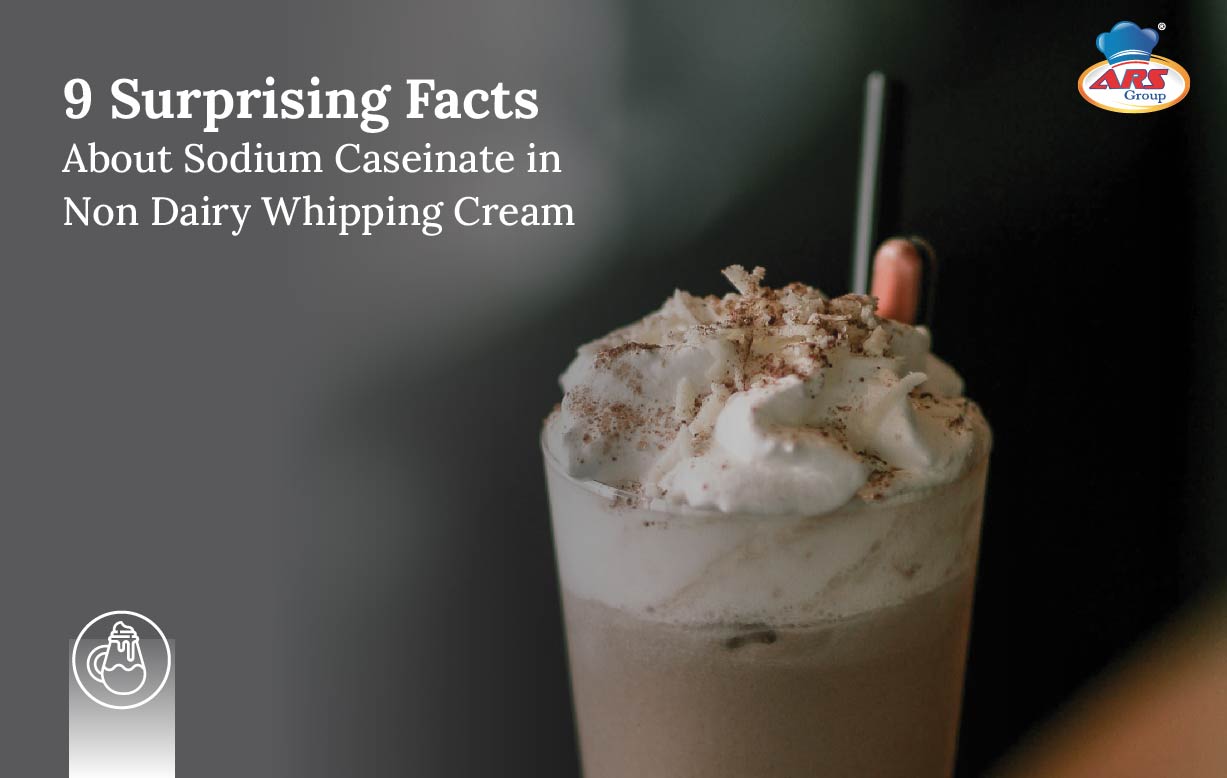 Casein is a major source of protein, and it is usually found in animal milk. It can be added to infant foods, beverages, non-dairy whipping cream, pharmaceutical applications etc.

1. It improves the particle size distribution

Sodium Caseinate is a form of proteins which is very important because of its structure formation. The use of sodium caseinate adds a big improvement to the particle size distribution of non-diary creams. When a composition is tested and compared with whipped creams without sodium caseinate, the results show a drastic reduction in average particle size.

2. It enables the cream to withstand freezing

3. It improves the texture characteristics

Sodium caseinate is recognised for its influence on the structure of food and mechanical properties (referring to texture). In texture engineering, it can form anisotropic transglutaminase-induced gels under applied pressure. Testing the effects of sodium caseinate on the texture of non-diary whipped cream with a texturometer, the results show a considerable level of increase in consistency, viscosity and firmness in the cream. It is used to also produce thickening and whitening for its physical look.

4. It is useful for strengthening proteins

Sodium caseinate, being a major source of proteins is often used to enhance the protein content of non-diary creams. Casein, making up to 80% of the proteins found in cow milk is totally protein of itself. Whenever vegetable proteins are found to be insufficient, they are often enhanced by the introduction of sodium caseinate. Which can be nutritionally beneficial to the body.

Creams are usually whipped until desired properties are exhibited; like increased viscosity and overrun. A well whipped typical cream will often have an overrun of 50 percent to 60 percent. The addition of sodium caseinate when observed visually increases the ability of the composition to be whipped to an overrun of 200 percent and offer freeze-thaw stability.

6. It is a healthier option

High-fat dairy products are not considered healthy because the increased fat content is not heart-friendly with the promised risk of heart diseases. The use of sodium caseinate to complement protein in low dairy whipped cream makes it healthier for consumption and poses less exposure to the risk of diseases.

7. It acts as an emulsifier

Majorly, emulsifiers are used in food processing. Ice cream, yoghurt, low-fat spreads are some examples of food based on emulsification. Emulsions are very important in food processing as they contribute to physical and dietary properties.  Traditionally whipped creams with aired emulsions are usually prepared by the clumping of fat droplets which are partially crystalline. This is what often gives the traditionally whipped creams increased viscosity. Sodium caseinate is added to non-fat creams because it is very good at inducing and stabilizing the emulsion. The stability refers to the ability of the emulsion to be unchanged physically over a period. In composition, it finely aids the breakdown and dispersion of the mean droplet sizes of constituents into another without collapse.

Non-dairy products are supposed to be without milk or any of its derivatives. The addition of sodium caseinate to the composition is often used to add a hint of dairy flavour.

9. It has nutritional benefits

Sodium caseinate is known to contain every amino acid that is essential for the body, posing a good nutritional value. It has a very high protein efficiency ratio (PER). Protein efficiency ratio (PER) is the ratio of the weight gained by a body over specific time to the measure of protein intake. The proteins contained in sodium caseinate are absorbed into the body without any form of difficulty. This is one major reason for which it is usually included in baby foods and amino acid supplements.

Everything you have ever