10 Compelling Reasons Why You Need Yeast in Bakery Products 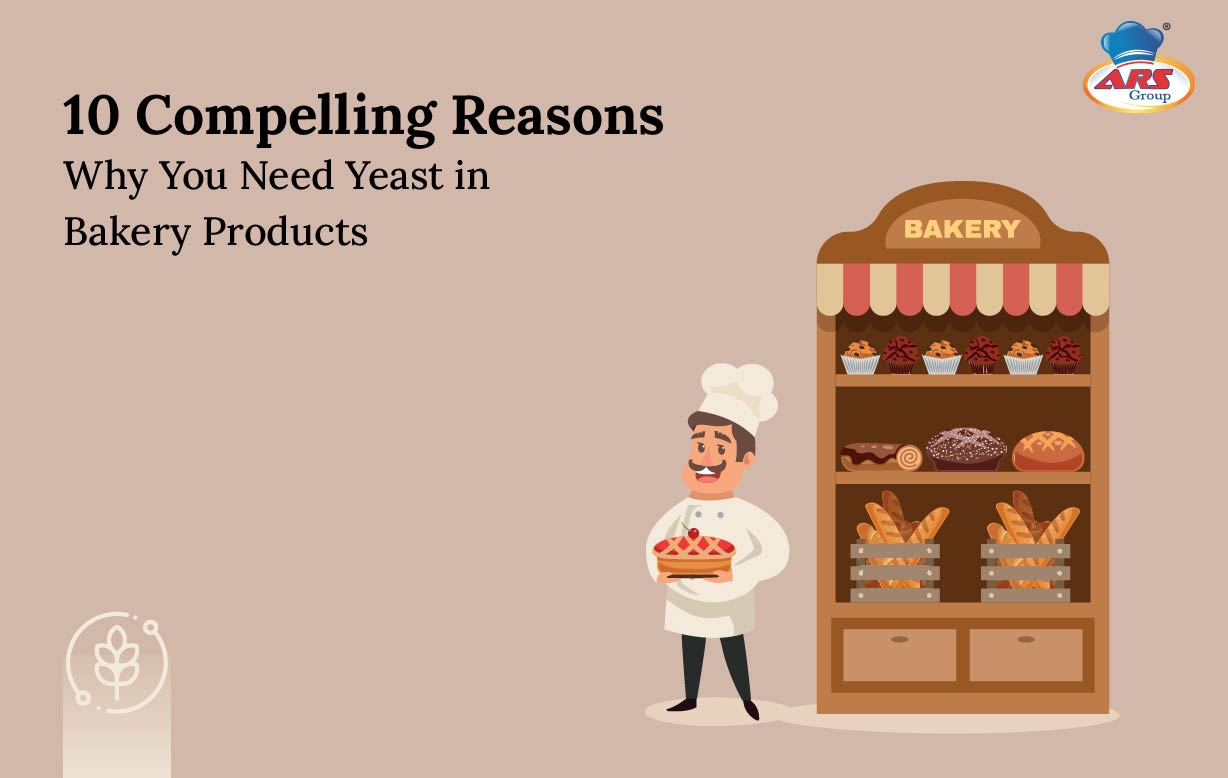 No dough is complete without yeast. From a time as old as the pyramids, yeast has been a key ingredient in baking. Thought as magic, the Egyptians knew the potency of yeast cells in the leavening of bread. Although not fully aware of the content of yeast neither fully understood the mechanism of its action, the Egyptians were able to document what they can about yeast and its importance as a baking ingredient.

Some of the importance of yeast in baking include:

Yeast is known as the best leavening agent used in the baking industry. Baker’s yeast is capable of fermenting the sugar present within the flour. The process of fermentation yields alcohol and CO2 which causes bread to rise. The leavening of bread is an important process of bread or dough making as it adds to the flavour and texture of the baked food.

Depending on the strain of yeast used and other ingredients present in the flour, yeast is known to contribute to the taste and texture the bread. Modified strains of yeast cells are grown to contribute to the taste of the flour along with its oven rise ability. The use of baking powder, on the other hand, gives an unpleasant taste of sodium bicarbonate which certainly won’t make you look like a very good baker.

For some, baking powder is a better option than yeast as both are used for the same purpose of creating a rise in the flour. As true as it may sound, baking powder is a synthetic ingredient with Na2CO3 as the main component. The used of baking soda at unmeasured amount tends to affect the flavour or taste of the baked good or completely produces a contrary result to what the baker intend to bake. As a natural leavening microorganism, yeast doesn’t only add to the list of the amazing baking recipe, it also adds to the flavour of the baked good. The use of yeast for baking supplies other organic metabolites which add to the taste and flavour of the baked good.

Yeast ferments sugar to produce carbon dioxide and alcohol, but that’s not all. The process of fermentation also produce some aromatic organic metabolites which add to the flavour of your baked food. The presence of aldehydes and ketones as other metabolites of fermentation adds to the flavour of dough or cakes made with yeast as a leavening agent. Yeast is an important condiment when the flavour and taste of your baked good are considered important.

Aside from adding to the taste and flavour of bread, cakes and other baked goods, yeast brings out the characteristic texture of a baked product due to the entrapped air pockets within the dough. The gluten protein present in the flour creates an elastic network which entraps the air within it. The fluffiness known of tasty bread and cakes is usually as a result of the yeast used in the baking process. Food baked with yeast always appear fluffier and tougher than those made with just baking powder.

Yeast is an essential ingredient, often irreplaceable, in the recipe of some baked goods. The Hungarian but roll, yeast doughnuts, rye bread, full wheat bread, pizza, Tsoureki bread, Fougasse and so on, are recipes that require yeast as a key ingredient. The recipes are not complete until the yeast is added because the yeast plays a key role in the taste and flavour of the food. The baking powder cannot be used as a substitute as it is often tasteless and lacks the traditional flavour of the baker’s yeast.

The yeast is not just an ingredient for baking; it also supplies nutritional benefits in our body. The yeast not only metabolizes sugar in the biochemical process, but it also supplies enzymes and protein to help perform this functions. These proteins are rich in nine essential amino acids particularly glutamic acid. Yeast is also a rich supplement of fibre, phosphorus, potassium, iron, magnesium, zinc, and B vitamins like folate and niacin. These vitamins and minerals help to maintain body functions and fight off diseases.

For more than a few reasons, yeast is known to possess medicinal benefits in its natural state. The use of yeast as a baking ingredient comes with its health benefits. As a rich supply of antioxidants, yeast helps to slow down the effects of free radicals which weakens the body system and exacerbates ageing. Yeast is also known to help prevent cancer growth in the body. Research showed that when cancer cells engulf yeast, they tend to undergo apoptosis which leads to the death of the cancerous cells. The use of bakers yeast in food can help to boost the immune system. Yeast contains beta-glucan fibre in its cell wall; this helps to fight pathogens in the body.

Food baked with yeast as a leavening agent always last longer than those baked with baking which makes it the choice of renowned bakers. Yeast is the choice of traditional baker in spite of the relative period of two hours of leavening. Yeast delivers the traditional flavour, taste and texture in every special recipe of baked goods.

The Future of F&B I

All about post-covid pro

We use cookies on our website to give you the most relevant experience by remembering your preferences and repeat visits. By clicking “Accept All”, you consent to the use of ALL the cookies. However, you may visit "Cookie Settings" to provide a controlled consent.
Cookie SettingsAccept All
Manage consent

This website uses cookies to improve your experience while you navigate through the website. Out of these, the cookies that are categorized as necessary are stored on your browser as they are essential for the working of basic functionalities of the website. We also use third-party cookies that help us analyze and understand how you use this website. These cookies will be stored in your browser only with your consent. You also have the option to opt-out of these cookies. But opting out of some of these cookies may affect your browsing experience.
Necessary Always Enabled
Necessary cookies are absolutely essential for the website to function properly. These cookies ensure basic functionalities and security features of the website, anonymously.
Functional
Functional cookies help to perform certain functionalities like sharing the content of the website on social media platforms, collect feedbacks, and other third-party features.
Performance
Performance cookies are used to understand and analyze the key performance indexes of the website which helps in delivering a better user experience for the visitors.
Analytics
Analytical cookies are used to understand how visitors interact with the website. These cookies help provide information on metrics the number of visitors, bounce rate, traffic source, etc.
Advertisement
Advertisement cookies are used to provide visitors with relevant ads and marketing campaigns. These cookies track visitors across websites and collect information to provide customized ads.
Others
Other uncategorized cookies are those that are being analyzed and have not been classified into a category as yet.
SAVE & ACCEPT